Has ATX run its course?

As a technical journalist I have been very fortunate to be able to test the latest and greatest hardware as (and sometimes before) it hits the market. Lately I have noticed that our current form factor ATX seems to be reaching the limits of its usefulness. ATX (Advanced Technology Extended) was introduced in 1995 by Intel as the 'replacement' for the AT form factor that was pioneered by IBM in the 1980s.

The new form factor had a better tracing layout and used the 'new' PS/2 connections for mice and keyboards. This replaced the rather large AT connector for keyboards and the 9-pin serial connection for the mouse. The other item that was replaced was the power supply. In the old AT form factor the PSU was much less powerful and used (for the most part) a standard open/closed switch for turning the system on and off. 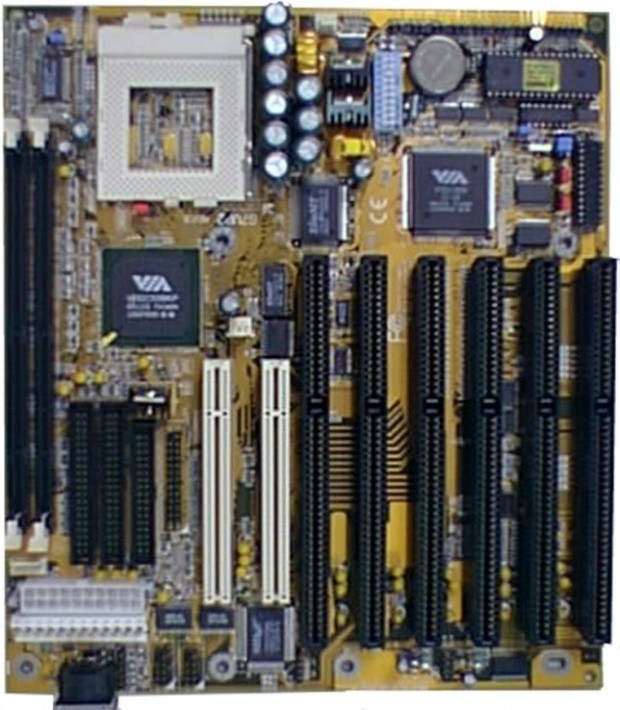 Late version of the AT Form factor that supported both PSU types.

With the introduction of the ATX form factor we moved to a momentary contact switch for turning the system on and off. This meant that there was no direct disconnect for power. Even while the system was "off" you still had stand-by power going to the board. The momentary contact from the power switch enabled full power and your system was off and running.

Of course, these are very simplistic items to discuss when we talk about motherboard design. If we went into detail this article would grow to several volumes to describe the various virtues of ATX. Intel changed a great deal including extending the board for a cleaner tracing layout. Traces are the small copper lines under the surface of the board; these traces connect the different components and if they are not laid out properly can result in current bleed and cross talk.

But now that we are 15 years from the introduction of the ATX form factor and have seen many new variants come out (micro-ATX, Mini-ATX, E-ATX, etc), has ATX run its course?

ATX's current revision was born back in 2007. This was version 2.3 and represented a number of changes over the years (the exact number of revisions is a matter of debate as there were a few versions that ran concurrently). ATX versions 2.2 removed the 4-pin Aux power connector and added it to the PSU, moving the PSU from 20 to 24 pins. However, ATX 2.3 put it right back on and in many cases added 4 more pins to cover the power needs of the board. The 5v and 3.3v tolerances were increased in addition to a number of minor changes to address increased power requirements.

Now, however, we are seeing motherboards that use more than even the extra 8-pin 12V Aux connector. In the past month I tested a board, the MSI Big Bang X-Power that used two 8-Pin Aux connectors and a 6-Pin. 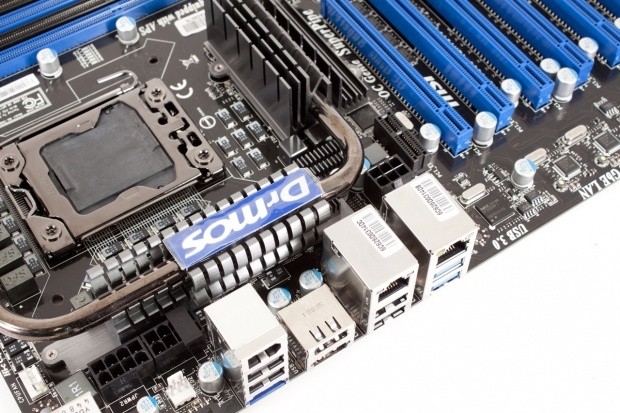 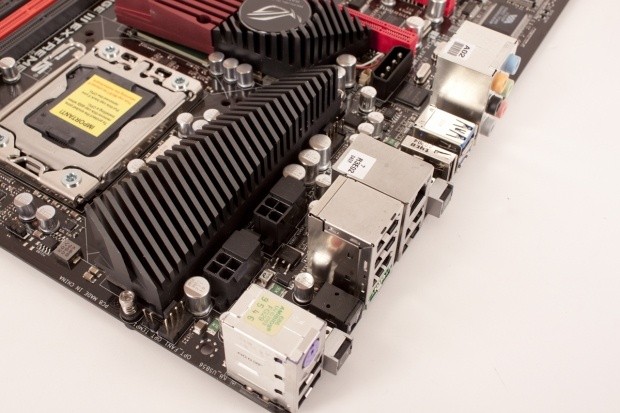 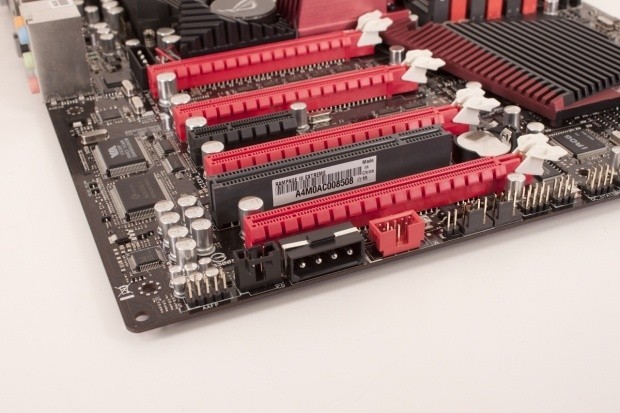 So with this in mind, we have to wonder, how many revisions of the ATX spec for motherboard design and PSU is enough? Do we need to move to a new form factor and PSU spec? We asked around to see what the industry thought about this. Flip over to Page 2 to see what they say.

Has ATX run its course? - Continued

Has ATX run its course? - Continued

Intel, as the creators of the ATX standard replied in pretty much the way I expected.

"ATX and its family of form factors continue to deliver standard ingredients, enabling the industry to readily make mini towers and desktops. Full ATX is still expected to remain relevant for the high end and enthusiast segments where configurability by the end user remains key. MicroATX (uATX) will continue to dominate the mini tower as a smaller board that still allows for all the configurability most customers desire. With the trend to smaller systems and a higher level of feature integration, Mini-ITX form factor has emerged as a compelling smaller form factor, enabling systems down to ~2 liters. Today custom designs remain a significant part of the smaller and all-in-one systems segments, with the possibility of standard based ones in the future if the market demands."

AMD and GIGABYTE did not respond by the time of this writing. Both ASUS and MSI only responded, saying they did not know of anything in the works to replace or improve on ATX. What this means is that for the foreseeable future ATX (including MicroATX, E-ATX etc.) is here to stay.

While I agree on many points in the comment (full ATX is the most common enthusiast board), it does not cover some of the concerns of power and heat. As one system builder commented, "the original ATX spec did not account for so much heat to be produced from the expansion cards". As anyone that has built a higher-end system knows GPUs from both AMD and NVIDIA generate a ton of heat. The design layout of the ATX form factor puts these GPUs in close proximity to the Northbridge and also the CPU. With this proximity comes the issue of heat saturation. 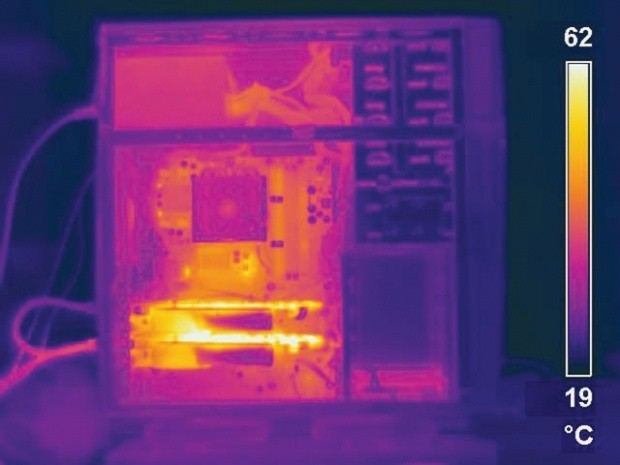 As you can see in the image above, the dual GPUs are generating quite a bit of heat. This heat can be seen to rise to affect the Northbridge and the CPU. This heat then continues to rise and will begin to affect the ability of the PSU to keep its components cool as well. Now, some may see this as a flaw in the design of the enclosure and to some degree they would be right. The problem with that school of thought is that enclosures are developed to fit the form factor standard. ATX is designed to conform to the ATX specification for size, mounting and even power connector location.

In the last few years we have seen some changes in the school of thought for case design, though. These seem to be an acknowledgement of at least one flaw in the ATX layout. They have moved the PSU to the bottom of the enclosure to reduce the amount of recycled hot air. This is actually something taken (at least in part) from the BTX standard. We are also seeing more cases with top vents to help exhaust the hot air out the top of the case.

Speaking of the BTX form factor; we know that Intel knew about the thermal issues of ATX, at least to some degree, as BTX was created to deal with these. Where BTX failed was that its layout prevented (or we should say excluded) the efficient use of CPUs with an internal memory controller. The CPU was moved to the front edge of the board with the Northbridge to the right and the RAM above that.

Although the image above is rotated a little, you can see the design intention here. However, the problem with this is that if you are using a CPU with an internal memory controller you cannot have this type of offset. It would be almost impossible to create a tracing layout that could deal with this. The RAM slots need to be centered on whatever is the primary memory controller for the most efficient pathway. Now, when there was a Northbridge in the mix there was some flexibility here, but not much. Looking at BTX you can see the acknowledgement of the thermal (and to a lesser extent, power) design flaws of the ATX spec.

However, as ATX is here to stay for a while, we are left with little choices for its usage. To combat this, some case manufacturers have flipped the motherboard upside down and in more recent times rotated it 90 degrees. What this change in case design is, is another subtle acknowledgement of the problem that most enthusiasts (and many mainstream consumers) are aware of. The ATX spec that was released over 15 years ago did not foresee the heat generated by today's components.

Intel is aware of the issue and even showed us a solution of sorts, but their own CPU plans killed that movement before it could take hold. When will we see a replacement for the aging ATX layout? I honesty do not know, but if BTX is any indication, any new design is going to be difficult to create given the speeds of today's CPUs, GPUs and memory. As these continue to increase in speed the development of a new form factor grows in complexity due to the need for specific tracing layouts to each component of the board. Intel and others certainly have a big job on their hands, but we are fairly certain that they are working on something. The questions is only when will we see it.