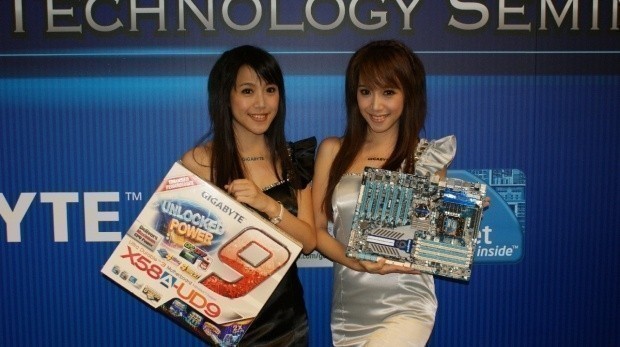 
It was impossible to miss GIGABYTE at this year's Computex in Taipei, Taiwan. GIGABYTE's logo was everywhere you looked and not just in the normal places either. As you could imagine, GIGABYTE had a booth at Computex, but they also had a special Technology Zone setup in the Taipei 101 that showcased their own and partners products.

With GIGABYTE having 78% of all USB 3.0 certified motherboards, it is easy to see why nearly every company showing products on the show floor were doing so in conjunction with a GIGABYTE motherboard. Outside of the show GIGABYTE had a presence, too. From local English style pubs to giant banners that hung from buildings, it was clear that GIGABYTE wanted to be seen this year.

Most of the highlights from Computex came in the same hour when GIGABYTE and their partners held a Technology Seminar on the 36th floor of the Taipei 101. 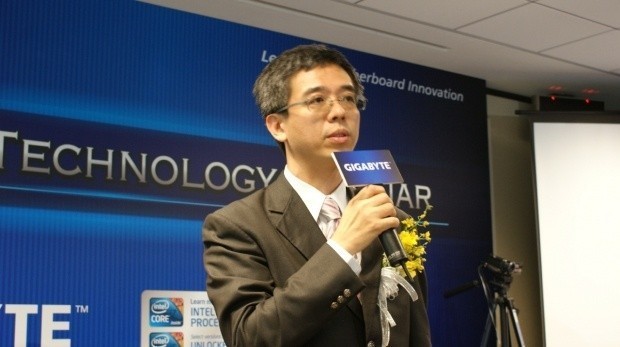 Henry Kao, VP of GIGABYTE Motherboard Business started the show with an opening speech that would set the tone for things to come.

"Not only have we sold more USB 3.0 enabled motherboards than any of our competitors, but we still continue our leadership in this segment by implementing USB 3.0 on a full range of our motherboards, from our flagship GA-X58A-UD9 motherboard, down to the value oriented GA-EP41T-USB3."

Certainly we were off to a good start since hearing about winning now is always much better than hearing about how you performed five years ago. We visited a few key note speeches from other companies that were mostly about past performance and didn't say much about the future. GIGABYTE has a top to bottom strategy for USB 3.0 and has already achieved this goal, but Henry wasn't going to let the cats out of the bag for future products. 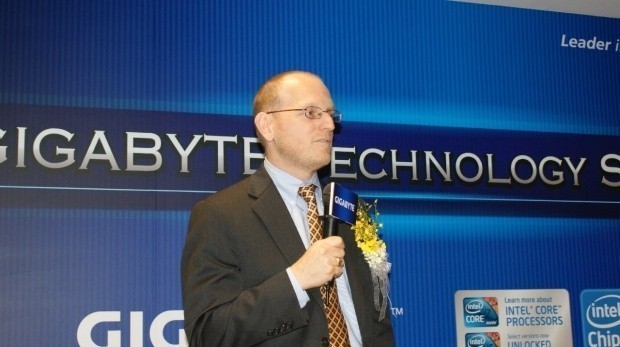 Zane Ball, Intel's General Manager of Desktop Platforms Division then welcomed members of the international press. Intel and GIGABYTE now share the goal of bringing award winning features to the mainstream market and what could be a better feature than overclocking? - Intel now offers unlocked processors for the mainstream with prices starting as low as 216 USD for a 3.2GHz processor that is factory unlocked.

Having a processor that is unlocked is just one piece of the puzzle; most mainstream motherboards are not built with overclocking in mind at the mainstream level. GIGABYTE has been offering overclocking features in most of their mainstream products for many years and has perfected this feature. Intel recognizes GIGABYTE's efforts and is glad to have a partner as dedicated to performance as GIGABYTE.

"We are thrilled to see the enthusiasm and effort GIGABYTE is putting behind their motherboards for this segment." 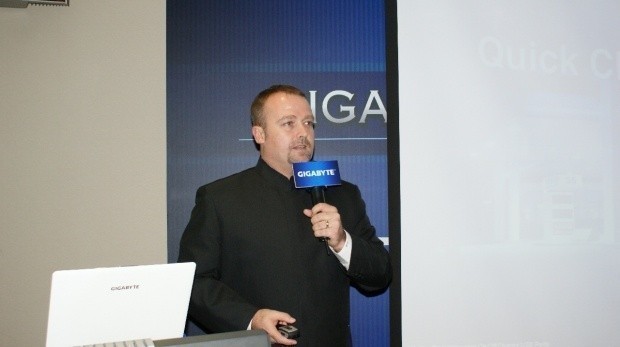 Tim Handley, Deputy Director of Motherboard Marketing came out like a bolt of lightning to shock the audience with an announcement. GIGABYTE's new GA-X59A-UD9 is able to deliver 1500 watts of power to the CPU.

GIGABYTE has a long history of removing technological barriers in their motherboards to achieve maximum performance. Getting good clean power and lots of it is the key to very high overclocks, but the X58A-UD9 takes CPU power technology to a whole new level. 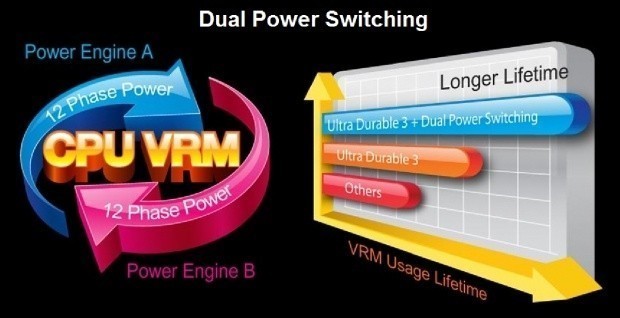 Passing all that available power might lead some to think that component life might be shortened, but with GIGABYTE's new Dual Switching power, that is not the case.

GIGABYTE Unlocked Power also delivers better durability and longer component lifespan due to the industry's first Dual Power Switching* design. When Dual Power Switching is activated, 2 sets of 12 power phases operate in tandem, automatically turning on one set of 12 phases and powering down the other 12, allowing the non active set to rest. Unlike a traditional power design where some of the same power phases are always in operation which can cause them to wear out and fail prematurely, GIGABYTE Dual Power Switching ensures that each set of phases share the power workload, effectively doubling the lifespan of the phases. 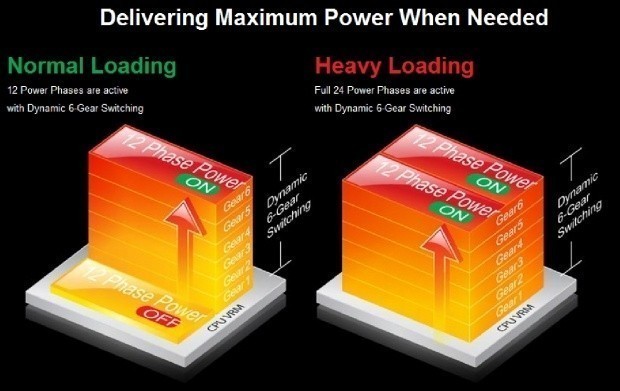 Since no one needs to run their processor at incredible loads all the time, or the electric bill that would go along with it, GIGABYTE has created Phase Boost with Multi-Gear Switching.

When CPU loading requires more than 12 phases to be active, GIGABYTE Dual Power Switching temporarily suspends and the full 24 power phases are unlocked, allowing for maximum power delivery. For overclockers and power users, this means during maximum loading, all 24 power phases can be activated. When the system detects that CPU loading has again fallen below twelve power phases and will probably maintain lower CPU loading for a while, GIGABYTE Dual Power Switching will again activate automatically, ensuring users have the best of both worlds; maximum power delivery and maximum durability and power efficiency.

All of the aforementioned power features are designed to aid in overclocking, but GIGABYTE is about to change the way we do that, too. 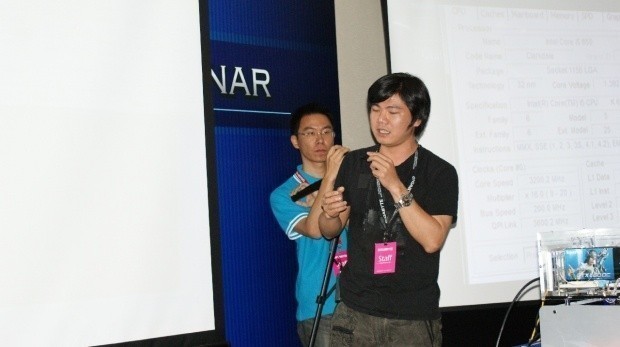 Hi Cookie, GIGABYTE's resident overclocker took to action when it was time to start pushing performance to higher levels.

We are all familiar with Windows Hot Keys, combinations of buttons that when pressed together return a new action. ALT + TAB is one that I use most often, but now you can have performance profiles stored right on your keyboard with GIGABYTE's EZTUNE software that enables the new HotKey OC feature. 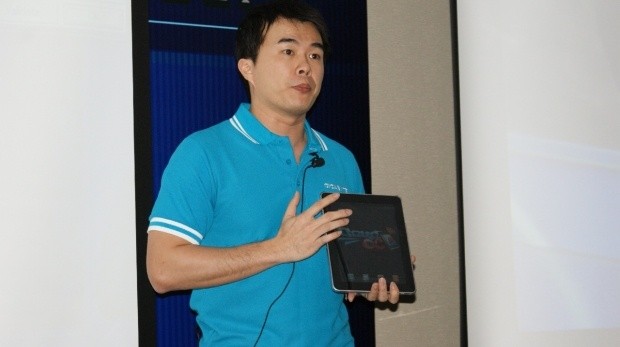 It took a little time, but someone has finally found a use for the iPad. GIGABYTE's new Cloud OC feature is the first web based overclocking utility. Since it is based in the cloud, it will run on most web enabled devices including mobile phones, iPads and even other PCs.

GIGABYTE made a promise to us that even more exciting features will make their way to the cloud in the future.

At the technology seminar we learned that 78% of all USB 3.0 motherboard designs certified by USB-IF came from GIGABYTE. GIGABYTE has more USB 3.0 products on the market than any other company and in most cases more than any two other manufacturers combined. From the flagship X58A-UD9 to the mini-ITX GA-EP41T-USB3 and everything in between, GIGABYTE has included USB 3.0. Normally we would start talking about a price premium here, but there really isn't one. We were able to look online and find GIGABYTE USB 3.0 motherboards for less than 80 USD. 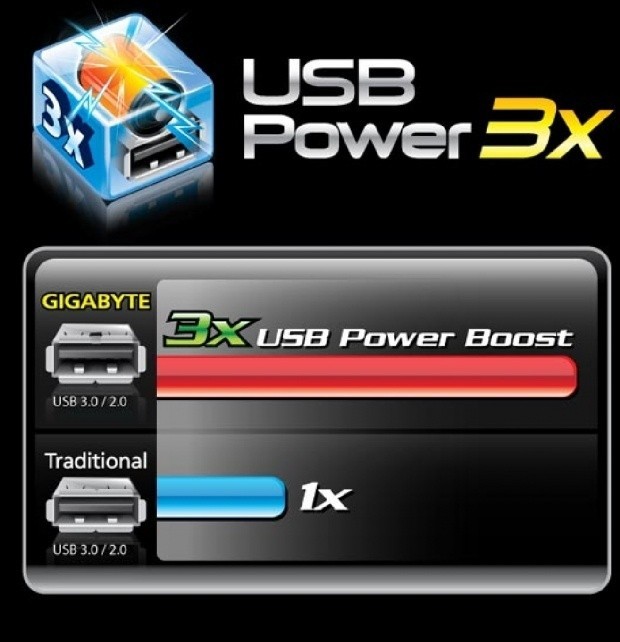 When GIGABYTE launched USB 3.0 motherboards with their 333 campaign it was revealed that GIGABYTE's new products were now able to supply more power to hungry devices when these devices asked for it. The iPad is not the only product on the market to take advantage of this feature. Before my X58A-UD7 arrived my Verizon (HTC) Imagio would actually use power faster than a standard USB port could provide when the battery was low. I could be plugged in and talking and the phone would shut down with a drained battery.

Who wants to run their PC just to charge their phone faster? Luckily you no longer need to run your PC thanks to GIGABYTE's new On / Off feature.

GIGABYTE paved the road for peripheral manufacturers to quickly launch USB 3.0 devices. Just a few rooms away from the briefing were USB 3.0 products being displayed by other manufacturers. 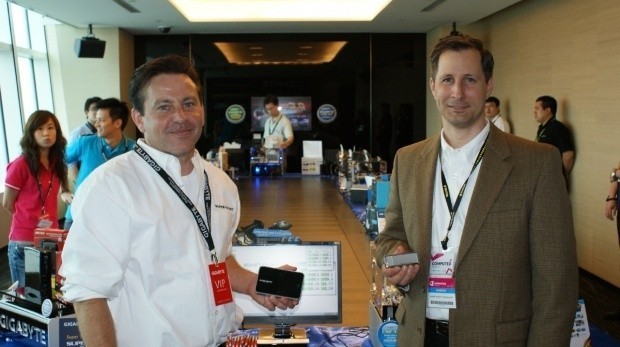 Super Talent had three new products on display at the GIGABYTE USB 3.0 showcase. Look for a full review of the SuperCrypt here at TweakTown very shortly. The new RAIDDrive is Super Talent's flagship USB 3.0 product and the Express Drive is available for users looking to get USB 3.0 performance at a lower price.

Above is a preview of the performance for the RAIDDrive and SuperCrypt. 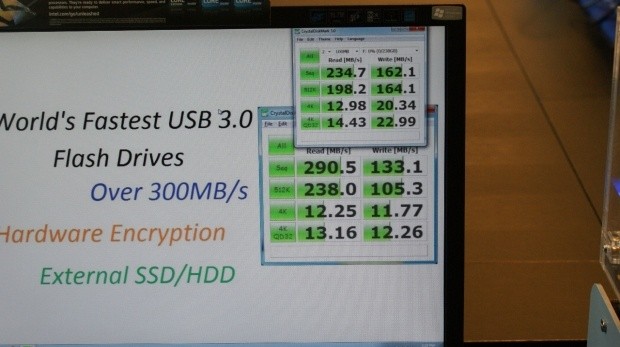 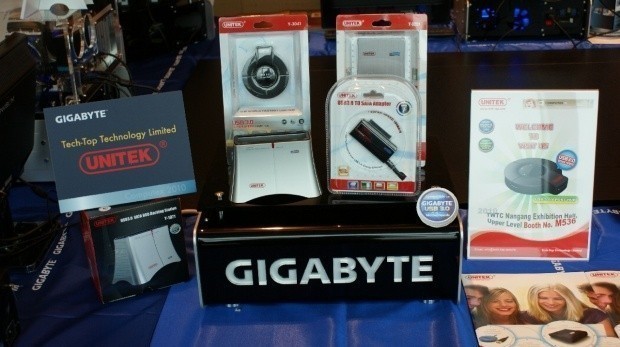 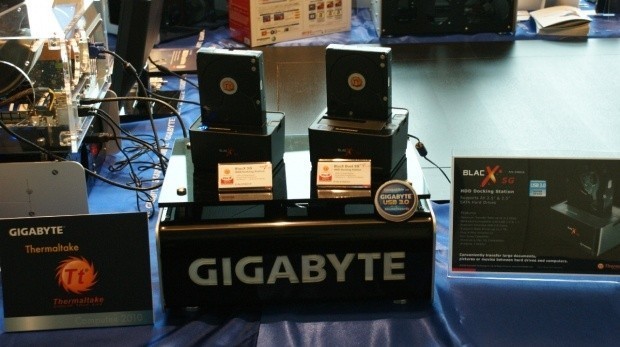 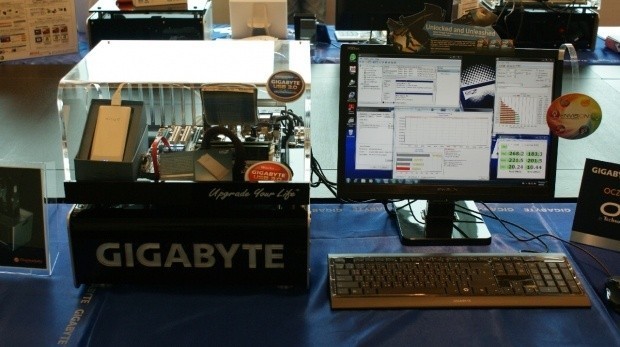 OCZ had the new Enyo on display at the show as well. Look for a review in the coming weeks here at TweakTown. 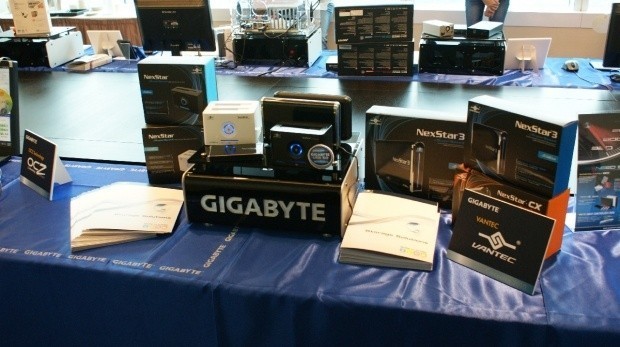 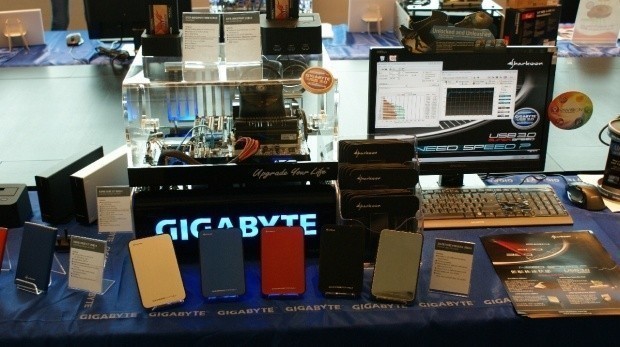 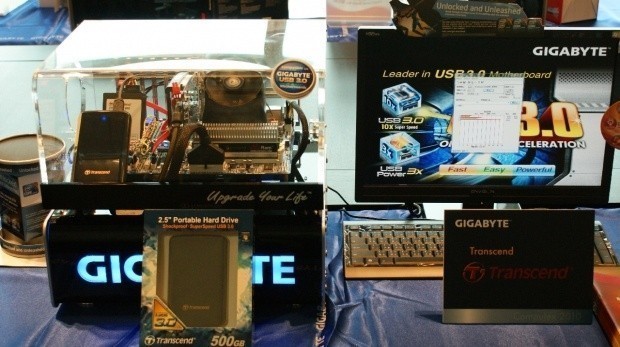 Sometimes it is difficult to look past GIGABYTE's extensive lineup of desktop products, but they also have many server and workstation class products. 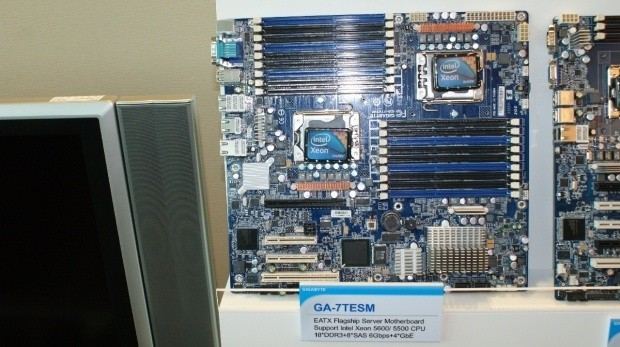 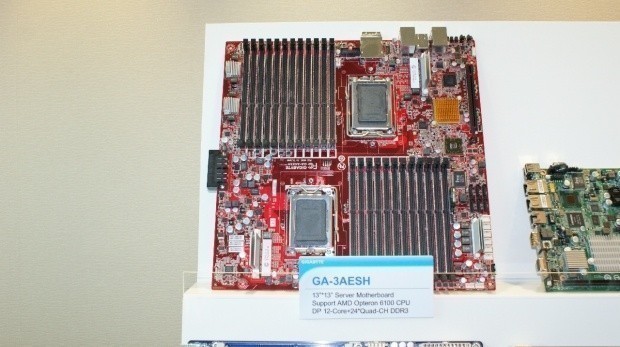 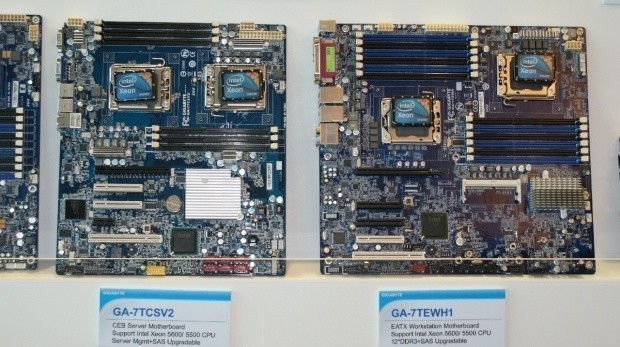 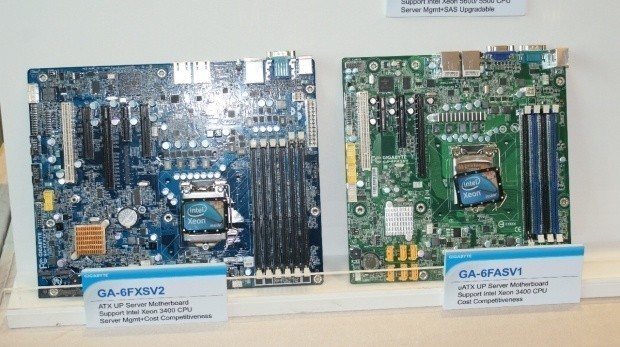 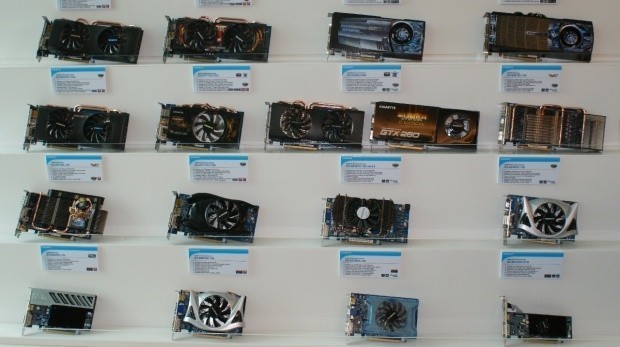 GIGABYTE is also one of the leading graphics card manufacturers. Here we see some of the latest video cards coming from GIGABYTE.