If you are like me and live in a cramped room with barely enough room to swing a cat-5 cable, you will definitely appreciate the necessity of space.

I've had a monster of a system taking up half my desk for months and while I love having a full on water-cooled beast in a giant tower case with more expansion than I can possibly fill, it's time to shrink it down a notch.

Today we are going to look at how to compactify a new rig build into a smaller yet classy enclosure.

For this article we worked with ZOTAC and Silverstone to build a rock solid system without breaking the bank.

ZOTAC were kind enough to supply their nForce 9300 mATX based motherboard along with a GTS 250 graphics card to really give this system a kick!

Also along for the ride was a Silverstone NT06 Evolution 120mm heatsink without fan and Kingston supplied us 4 gigs of DDR2 800 to complete the system.

For the processor we are using an Intel Core 2 Duo 45nm 2.66GHz CPU which has proven to have excellent over clocking potential as well as low temperatures at stock speeds.

Looking more closely now at the power supply, we have the usual arrangements of cable tidies and screws and the cables on this are noticeably shorter than anything I've seen before. This comes in handy when case space is at a premium!

Dual PCI-E power adapters show that Silverstone are serious about their equipment and want their customers to have the option to go SLI with their graphics cards.

Closer inspection of the motherboard reveals standard supplements of SATA cables, IDE, expansion bracket for FireWire as well as a back plate and manual.

Other notable features on the board are active cooling over the 9300 series chipset and the usual array of expansion ports and sockets on board, including POST-diagnostic led displays.

At the back there are a plethora of ports, including 6 channel audio, HDMI, DVI, VGA, USB and Coaxial audio out. I must say I'm a little disappointed not to see an optical output here; it should be a given now that if there's coax, there's optical.

A nice trend to see is the inclusion of onboard buttons on the motherboard for power and reset. ZOTAC realise their customers will probably dabble in the world of over clocking, so they save you the hassle of having to wire up the case switches if you wanted to run this board in a test rig.

Moving on to matters of cooling now, the NT06 heatsink is a copper piped and aluminium finned beast that can take a 120mm fan. I like the feature on top of the copper contact plate; there is a mini heatsink to help with cooling in an area that is almost definitely a hot-spot.

Not a huge amount of room between the fins and the base; a quick estimate puts it at about a 28/29mm gap. But this is enough to fit a fan in between there.

So that's what I did. Deciding to shove the fan in between the base and the fins means that this cooler will fit beneath the PSU when it mounts in the mATX case. Just wait and I'll show you what I mean.

You spin me right round...

Silverstone are one of these clever manufacturers who realise the key things with anything that spins is noise, so to help dampen your cooling fan of choice, they include some silicone washers to make your life a little quieter.

Once the fan is mounted you can see there is only a few millimetres of clearance between the base heatsink and the fan hub, but that's all we need!

The HS/F has to be securely fastened to the motherboard, so a backing plate is used instead of the flimsy plastic push clips on some heat sinks (I always end up breaking them).

This is starting to look vaguely reminiscent of installing a block for a water-cooling system.

The base of the heatsink allows you to attach brackets for different mounting options, including AMD flavours.

With the HS/F mounted you can see it just clears the Northbridge heatsink and doesn't overlap by more than a couple of millimetres, so you can still attach the fan as seen below.

With the motherboard installed you can now see that the top of the heatsink comes right up to the PSU mounting area which sits right over the heatsink. The plan is to use the heatsink/fan to force air into the power supply which also uses its giant cooling fan to suck in surrounding hot air and expel it out the back.

Inserting a DVD writer, here is the first of the issues with this setup. There's very little clearance with the HS/F and the connectors are in a recess that is not accessible to fat hands!

Not dwelling on the negatives for too long, we look now at the hard drive positioning with the unique foot mounting system Silverstone have employed.

The solid aluminium structure allows heat from the hard drives to be drawn away effectively like giant heat sinks.

Two Maxtors slide in on the plastic noise dampening rails and fit in just fine.

Slam in the RAM.

Now comes the heart of the operation, the ZOTAC GTS 250 AMP! Edition; a 750MHz cored 2.3GHz memory clocked card with a full GB of RAM.

This is a full 9-inch card with a beast of a fan on it to keep it cool.

Dual DVI outputs and a supplied HDMI converter means that you can hook it up to just about anything in hi-def.

With the option to SLI, this means that if you hook two of these bad boys up you can run most modern games in all their graphic lustre without even noticing a dent in your FPS.

Slotting this beast in place, it fills all but one available PCI bracket at the back (not counting the PCI-E 1x), so there's room left over to install a wireless card or any additional expansion you choose.

Finally, with the PSU in place the rig is complete and it's looking quite cramped in there now! - Cable tidying proves futile when there's so little space to hide them. 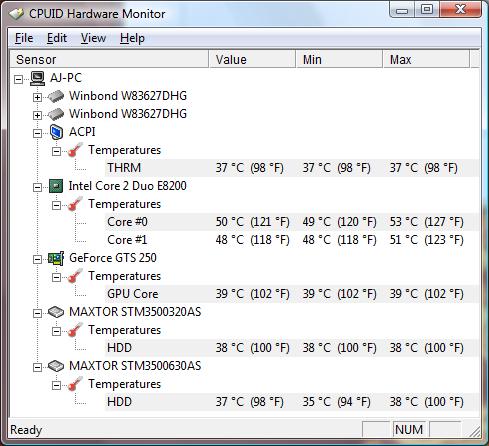 To give you an idea of the temperatures, above is the system at idle after 30mins of running. 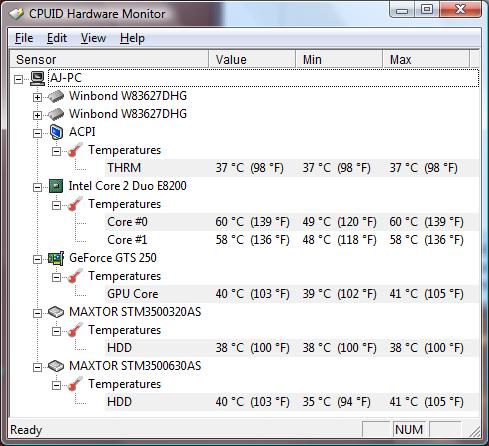 And now after stress testing with Prime95 for 30mins we note the temperatures again. Not too shabby; it looks like my airflow plan paid off and there is little heat build-up inside the case.

Well, there you have it! A compact gaming rig that won't break your desk or your wallet and makes room for even more desk detritus!