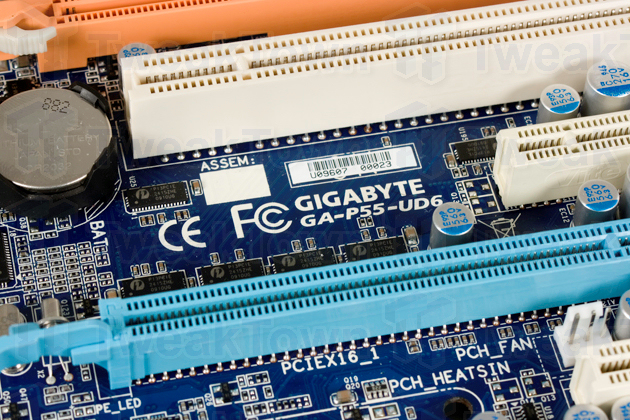 Back at Computex in June of this year GIGABYTE showed us some of their P55 boards. These new boards will support the new Lynnfield, or as it has been rumoured to be called, Core i5 CPUs from Intel. While Lynnfield is not due for launch until sometime in September, we had the chance to spend some quality time with one of GIGABYTE's high-end P55 offerings, the GA-P55-UD6.

So let's take a look at the shots we grabbed and talk about the features you can expect to see once the P55-UD6 is ready for the real world.

The GA-P55-UD6 has a fairly clean layout with a standard ATX form factor. As with all modern mainboard designs, we see the upper half of the board containing the CPU, RAM and power connectors. One additional "trend" that we have come to see in mainboard design is the inclusion of heatsinks surrounding the CPU socket. While this is there to keep the power regulators cool, it does clutter up the board and can make for awkward installations for larger cooling products. 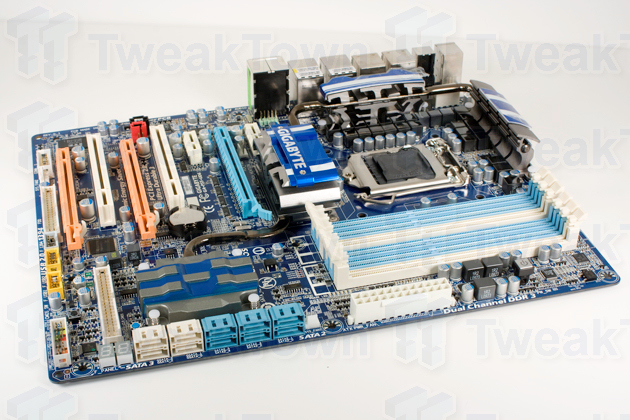 If you take a close look at the upper PCI-E x1 slot, you will notice something ugly. There is almost no way you can use this slot. The Northbridge heatsink blocks it from use. Yes, there are smaller x1 cards, but for the most part it is unusable and probably should not even be there. 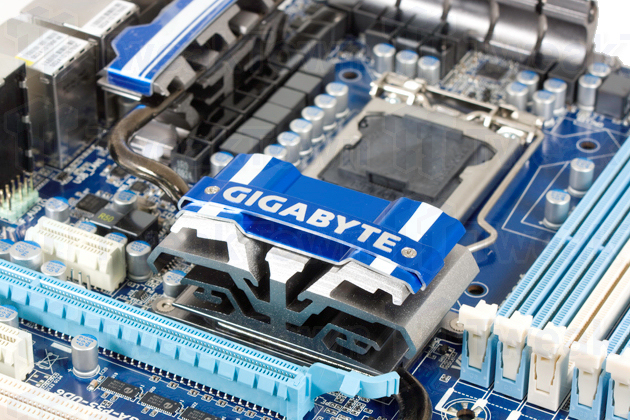 One other item that becomes more difficult to connect is the 8-pin Auxiliary ATX power connector. Due to its placement in the upper left hand corner of the board (as viewed when installed in a standard tower case) the heatpipe intended to cool the power regulators interferes with easy access, especially if you use a larger CPU cooling solution. You may want to consider getting an extender cable for this so you can plug it in before you mount the board into your case. 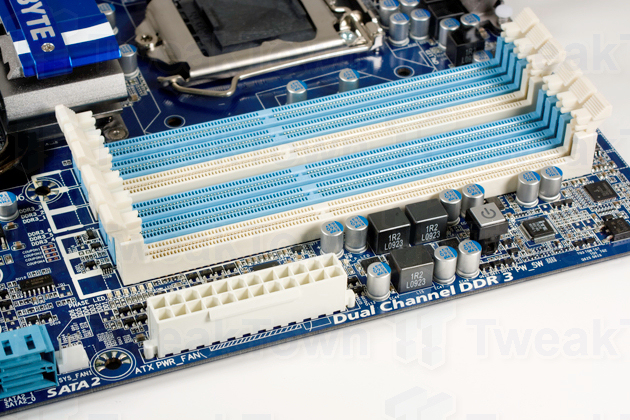 Taking a closer look at the CPU socket, we see a change in the hold down mechanism.
Instead of the normal clamp design that you see on 775 and 1366 sockets, the 1156 socket on the P55-UD6 has an interesting slide lock style. 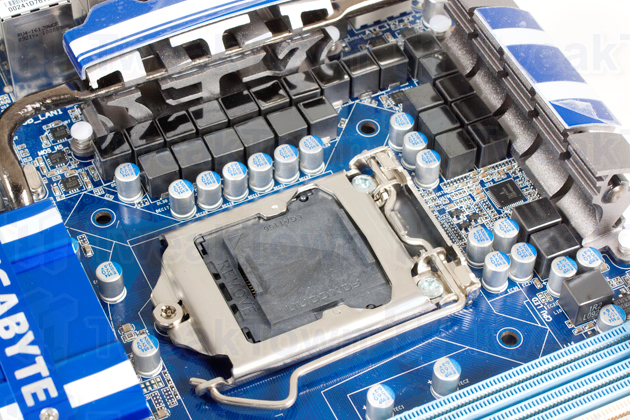 As you lift the locking arm the clamp moves backwards and releases from a single front "bolt" . 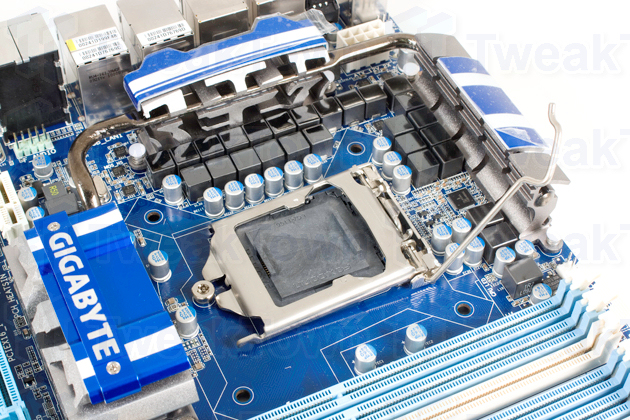 Once released you can lift the hold down clamp and install your CPU. 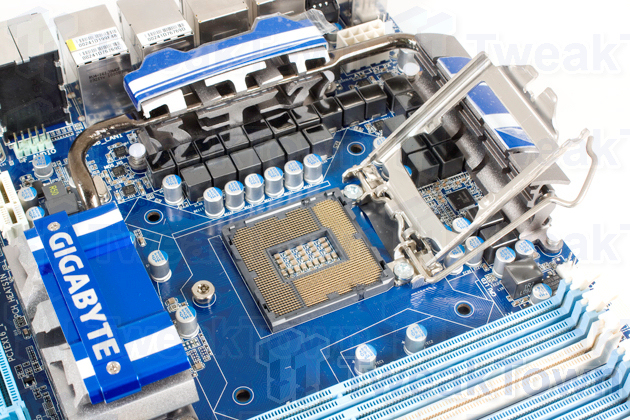 One of the items that Lynnfield is bringing is a different IMC (Internal Memory Controller). We see a departure from the Triple-Channel controller found in the i7 and a return to the more common Dual-Channel setup. What's interesting to note is that GIGABYTE has chosen to keep the familiar six slots in place, meaning you can put up to 24GB of DDR3 goodness on the P55-UD6.

We talked a little above about the cooling surrounding the 1156 socket, but we did not go into detail about what is under that cooling. The GA-P55-UD6 will feature 24-Phase power. This massive power regulation system can be glimpsed once you get the heat pipe system out of the way. 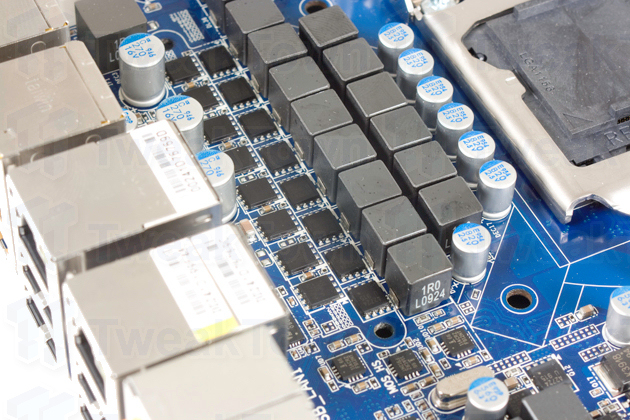 Note the blocks of ferrite chokes and solid capacitors that assist in supplying the P55-UD6 clean and stable power. It looks like this could be a great board for overclocking. 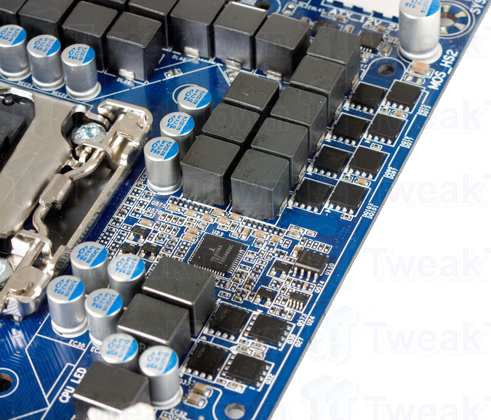 Of course, one of the big items here is the P55 chipset. Below you can see it in all its naked glory. It is much smaller than the X58 or even the X48 chips we have gotten used to. 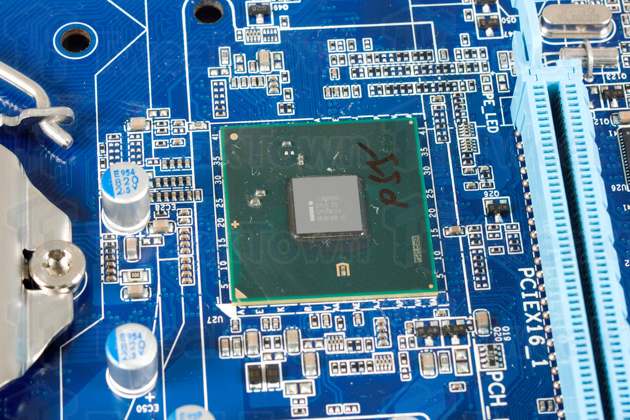 Now that we have covered the exciting upper half of the P55-UD6, we can move on to the lower half of the board. As with the rest of the P55-UD6, it follows a traditional ATX layout. We see the typical number of PCI-E slots and of course the throw back PCI slots. As we mentioned earlier, the top PCI-E x1 slot is pretty much useless, as is the one located directly below the primary PCI-E x16 slot. 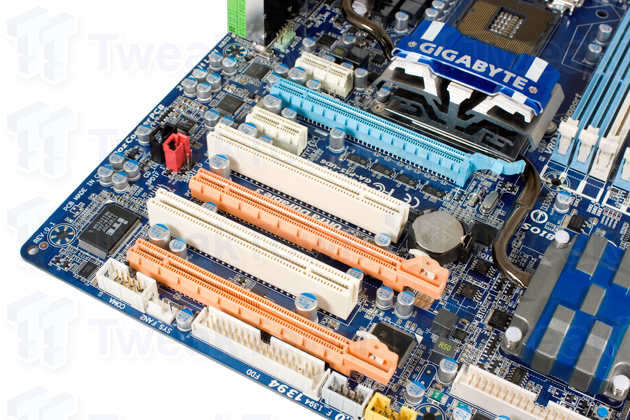 I have no idea what the designers were thinking here. It makes no sense at all to include these slots if they are not going to be usable by the majority of people. This board is obviously aimed at enthusiasts, so you can expect a dual-slot cooler GPU in this position.

When we had our "date" with the P55-UD6 GIGABYTE was still planning for a total of 10 (yes, 10) SATA ports. There would be six SATA-II and four SATA-6G ports. 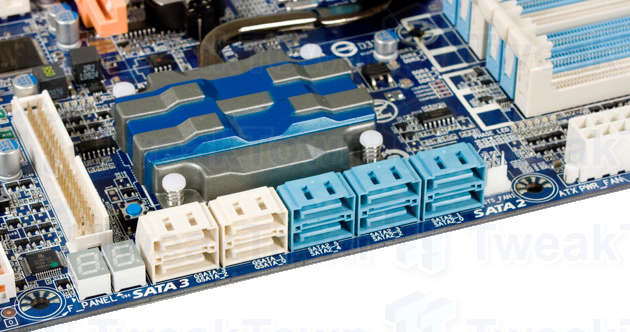 Unfortunately we have just recently learned that there are some issues with the Marvell controller used (shown below). This has caused a last minute redesign of the board.
We do not have any word on what will take the Marvell SATA-6G controllers place, but it could be another SATA controller to maintain the tracing layout that is already in place. 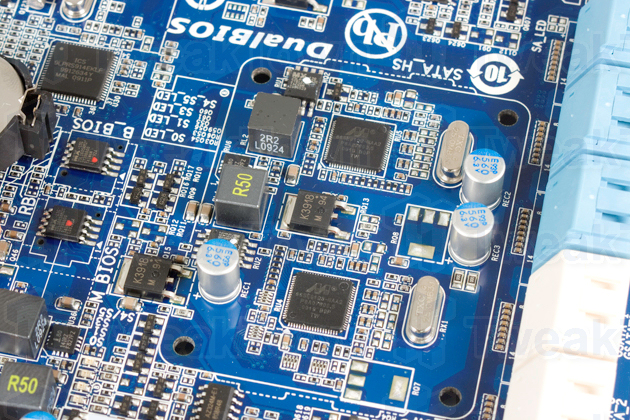 GIGABYTE has also included a set of diagnostic LEDs to help you with any POST-time trouble shooting. Some of you will also be happy to know that there is still a legacy PATA-IDE port as well as a floppy port. 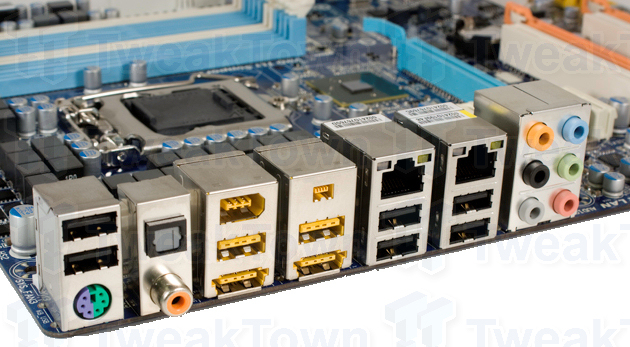 For the I/O side of the board we see that GIGABYTE is maintaining its usual plethora (yes, I know what a plethora is) of connectivity options.

There are eight USB 2.0 slots and what also appears to be two powered e-SATA ports. Further to that is Toslink and Coaxial digital audio out, a dual purpose keyboard/mouse PS/2 port, FireWire 400 and 800, Dual Gigabit LAN and the usual six-port analogue audio outputs.

Below we've included a few more images of the P55-UD6 for your viewing pleasure. 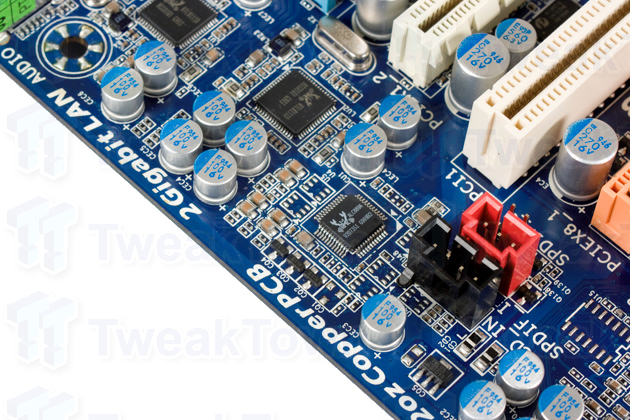 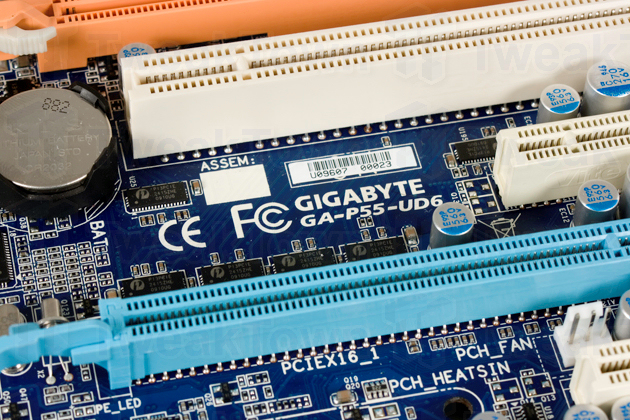 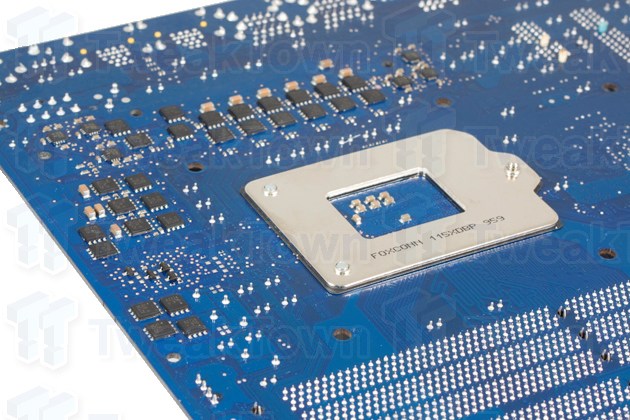 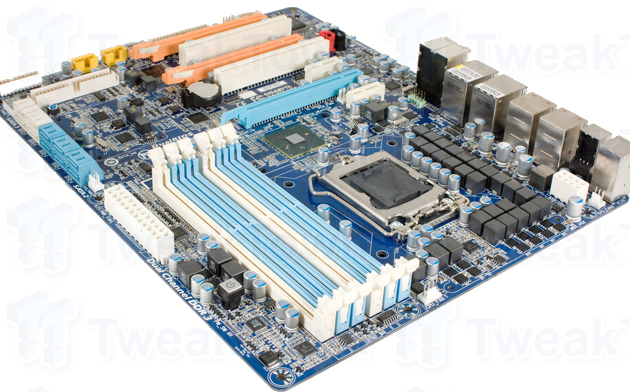 GIGABYTE has thrown in a full 2 ounces of copper into the construction of the board as well as adding in their Ultra Durable 3 technology. You will also find some great power saving features under the hood in the form of GIGABYTE's dynamic power savings.

The P55-UD6 has an on board power button (near the RAM slots) as well as an easy to access push button CMOS reset found near the SATA ports. It should have full support for ATI's Crossfire X and NVIDIA multi-card SLI as well.

One factor (like the P45 before it) is that it will not be full x16 across the board. The additional PCI-E slots while x16 physically are only x8 electrically. This means that your setup will run at x8 across the board if you have multiple GPUs installed.

Although there is a lot stuffed into the P55-UD6, it is not too far out of the normal realm for a modern mainboard. It is a shame that the SATA 6G support has to be pulled, but perhaps we will see it on future revisions.

It is hard to come to any real conclusion about the GIGABYTE P55-UD6, as we were not allowed to fire the board up and take it for a spin.

Looking at the physical layout, there are some concerns about space and useless PCI-E slots, but overall it seems to have a clean layout. The new socket on the P55-UD6 is a little awkward to use; when I was first playing around with it I was worried that I might actually scratch the board with the locking arm. This is not something to be taken lightly; as you can see in the enlarged pictures of the operation there are vital traces right below this arm. If one is cut you have a nice doorstop, but not much else.

On the features side, the removal of the SATA-6G controller is going to be a hit. True, there are no SATA-6G compatible drives out just yet, but it could make some people hold off on picking up a P55 and LGA1156 processor until they are ready and the controllers are working properly. I think this issue is really going to hurt adoption of this platform more than many realize. Yes, people will still buy P55/Core i5, but just not as many as might have if it were SATA-6G ready.

When the Core i5 is ready we hope to get back to the P55-UD6 in its more final form and give you a good indication of how it will perform for you. Until then we can say that while the P55-UD6 looks like it will be a stable and overclockable board, there are some design issues that GIGABYTE still needs to sort out to make it better.