Hands On With BD Live

Thanks to Sony Pictures, I recently had a chance to play with Blu-ray's fancy new BD Live (formerly known as 'Profile 2.0') system.

The first Blu-ray disc on the Australian market to come with such a feature - Men In Black, streets on Wednesday 25th June (look for my in-depth review within the next few days).

Keep in mind however, there are very few Blu-ray players on the market that come BD Live equipped; essentially it means that a player needs an ethernet port, and persistent flash storage of at least 1GB. Of course, most Australians with a Blu-ray player have a PlayStation 3, which became BD Live equipped earlier this year, and indeed I sampled BD Live using a PlayStation 3.

It's a momentous moment for Sony and the Blu-ray Disc Association; it now means that the messy profile business is behind them, including the picture in picture that held back many releases. It makes things easier to consumers, less confusing to explain and paves the way forward to mass adoption. Not least the fact that now Blu-ray is finally on par with features that HD-DVD sported from the get-go, two years previously.

Popping in Men In Black to the PlayStations disc drive, taking just a few seconds to load, users should navigate to the bottom of the extra features menu, where they will find a conspicuously large 'BD Live' logo. Clicking this results in a short pause while it contacts the local servers. Sometimes it will stay on this screen while it loads, locking you out of control function, or it may skip to a black screen; either way, it's doing the same thing. 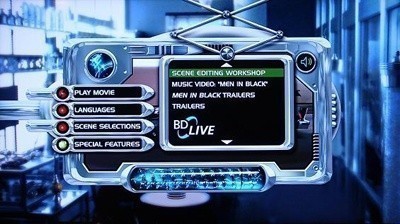 Once BD Live has loaded, users will find a small amount of contact which is now ready to go, including a smattering of trailers for other Sony Pictures Blu-ray movies, a Sony survey, and on this disc in question, the multiplayer Men In Black trivia game. 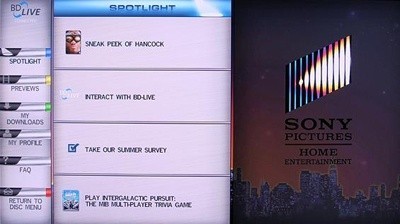 I sampled one of the trailers, Water Horse to test both speed and quality. Users can choose from SD or HD quality. I chose SD quality. It took a good 12 or so minutes to load, maxing out my 1500 Kbp/s broadband connection. The resultant quality was good, but certainly not great on a 52" 1080 LCD. For me, this just proves why full-length movie downloads aren't ready for prime time in the lounge room. After finishing viewing the trailer, you have the option of saving or deleting the file (default) and I chose to keep it. 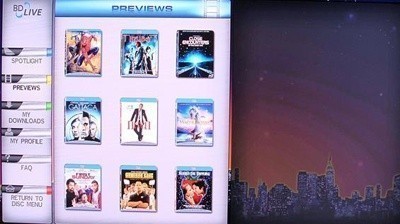 After downloading the file, it can then be found in the 'My Downloads' section, where you can watch it again if you chose to save the item.

I then completed the survey for Sony, whom asked questions on my Blu-ray usage. I hear that Sony are very interested in the results for the survey, so if you choose to complete it, please do so with care.

Hands On With BD Live - Cont.

Hands On With BD Live - Continued

After you've finished, you can then go back to the disc's main menu, via the option at the bottom of the screen. The PlayStation 3 stores the downloaded items on its hard drive and you can see which discs have downloaded items (but not view them) in the 'BD Data Utility' folder on top of the video section of the XMB. I would imagine that stand-alone Blu-ray players would store the items in the settings menu, or somewhere similar.

So what did I think? Well, BD Live is an interesting aside. Obviously it's only just starting out, but hopefully they make good with their promise of providing extra content after the discs release and not just advertising for other movies.

I would hope however, that they don't use the technology for technologies sake; that is, hold back a feature which would otherwise be ready to author to disc (for example; a commentary) just to advertise online features. Of course, if a feature is legitimately created after the fact, then providing it online is a great use of the technology available.

As 2009 rolls ahead, I would imagine that more companies will embrace BD Live - at the moment, it's currently solely the domain of Sony Pictures releases. Disney have made many favourable comments towards the technology and they are committed to including BD Live features on all Disney films, starting with the September release of Sleeping Beauty.

Now that the Blu-ray format has gotten over its hardware teething problems, the possibilities that software and networking can bring to the format can start to be realised, potentially taking things to a place that no one yet knows.