Intel has finally launched its Santa Rosa platform and it simply got christened Centrino Duo and Centrino Pro. The Duo version is for consumer and general purpose notebooks while the Pro is targeting professional users, i.e. office machines. Although this was fairly apparent considering that the vPro platform was targeting business as well, so this is a natural continuity for Intel to follow. All the machines shown by MSI are Centrino Duo models, but the only real difference would be the choice of ICH as the Centrino Pro platform features some advanced remote system administration features that are not included in the consumer platform.

It has taken longer than expected for the Santa Rosa platform to emerge from Intel and one of the telltale signs is the chipset names. On the desktop platform we are getting ready for the P35/G35/G33 chipsets, while the new Centrino Duo platform only gets a PM965 and a GM965 chipset. However, we do not think anyone will miss the 945 mobile parts, as the new 965 chipset offers a range of new features that brings the notebook one step closer to replacing the desktop.

For the performance junkies out there, the most significant improvement is the 800MHz bus speed, up from 667MHz of the 945 chipset. This is a significant increase, although it is budget level compared to a desktop PC, especially if you consider that we are about to move into 1,333MHz territory very soon. Nonetheless, this should allow for even better performance from notebooks, especially in combination with faster 667MHz DDR2 memory modules.

Robson technology or Turbo Memory is also part of the new Centrino Duo platform, although as this is still rather expensive, it is unlikely that most notebooks will ship with a Turbo Memory module fitted. It will also be interesting to see what impact Turbo Memory has on overall system performance, as ReadyBoost did not prove to be a huge hit. Other news includes support for draft 802.11n wireless networking, again something that only higher-end models are likely to ship with. SATA 3Gb/s is part of the new ICH and this should allow for somewhat improved performance. Intel has also added support for Intel Matrix RAID, which is interesting, so we might see a lot more notebooks with twin hard drives in the near future.

On the integrated graphics side of things, a new GMA has been developed, the X3100, which according to Intel offers twice the performance in 3DMark06. It also adds Vista Premium certification, HDMI support and better video playback performance for high-definition content. At the same time as Intel launched the new Centrino platform, Nvidia also announced its GeForce 8M series of graphics cards, which are mobile versions of the 8400 and 8600 series. These are already available in several Centrino Duo models from MSI as well as other manufacturers and this is the route to go down it you really intend to play games on your notebook. So let us take a look at what was on at the show.

First up we have the PR200, which is a 12-inch widescreen model. Although no specific CPU speeds were announced, it will have a Core 2 Duo chip and the GM965 chipset. Sadly this means we are talking Intel GMA X3100 graphics on this otherwise well featured sub 2kg machine. It can take up to 2GB of DDR-2 667MHz memory and MSI offers it with a range of hard drive sizes from 80-160GB. But the one feature that really stands is the HDMI connector, which makes it easy to connect the PR200 to modern HD displays and projectors, ideal both for home cinema use and presentations. Other features include the option of 802.11n or a/b/g wireless networking, a TV tuner, 1.3-megapixel web camera, Bluetooth, fingerprint scanner, a Super Multi DVD writer, Gigabit Ethernet, built-in modem, three USB 2.0 ports, FireWire and a built-in multi-format memory card reader. A pretty well kitted out little machine there, it is just a matter of how much it will cost. 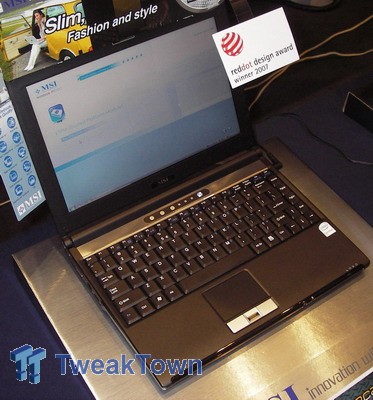 Next up we have the PR400, which is a larger model with a 14.1-inch widescreen display. This model shares several features with the PR200, but it lacks HDMI output. The chipset specifications were not available to us, but it is a Centrino Duo system. It will use DDR-2 memory and an educated guess here says GM965 chipset as well. The PR400 supports Intel's Turbo Memory technology and will come with 802.11n wireless networking. It also has a built-in fingerprint scanner, a Super Multi DVD writer, Gigabit Ethernet, built-in modem, three USB 2.0 ports, FireWire and a built-in multi-format memory card reader. A solid office machine, but hardly awe-inspiring. 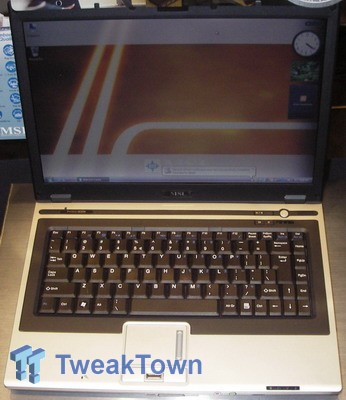 Guess what the next model is called? PR600 of course. This model has a 15.4-inch widescreen display, weighs 2.6kg and has a full size keyboard with a numerical keypad. Personally we have never been a huge fan of full size keyboards on notebooks, as you end up sitting off to one side when you are working on them. Anyhow, this one is also based on the GM965 chipset, it has support for 802.11n or 802.11/a/b/g wireless networking, various combinations of optical drives, a 1.3-megapixel web camera, a four-in-one card reader, FireWire, S/PDIF out and TV-out. It will be available with a range of 80-120GB hard drives and features a Type II PC Card slot rather than the newer Express Card standard. A fairly standard notebook, but it should at least be quite affordable. MSI also has a version called PR620 which comes with the addition of a port replicator and Turbo Memory support, as well as a fingerprint scanner. 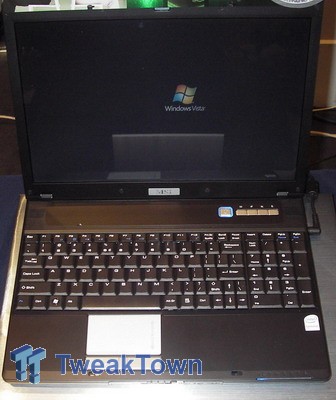 We are finally moving into the high-end territory now, with the EX600. Design wise the EX600 does not differ that much from the PR600, but it is a whole different kettle of fish underneath the plastic shell. This is the first model to use the PM965 chipset and it is also the first model to be powered by an Nvidia graphics card, the 8400M G. Although this is the most basic version of dedicated graphics from Nvidia, it is still an improvement over integrated graphics. The EX600 is also Dolby Digital Home Theatre certified. Again it has a 15.4-inch widescreen display, a PC Card slot, a four-in-one memory card reader, a 1.3-megapixel web cam, a range of options for the optical drive and hard drives coming in at 80-160GB. This model does not have support for 802.11n networking. 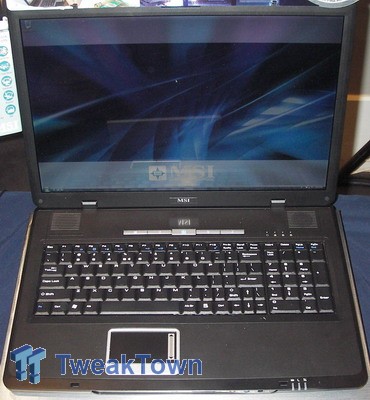 Finally we have two models that should appeal to those that fancy a bit of gaming on the move, the GX600 and the GX700. Both these models feature a GeForce 8600M GT graphics card, which is the top of the range solution from Nvidia. The difference between the two models is that the GX600 has a 15.4-inch display and the GX700 has a 17-inch display.

Both machines have Dolby Home Theatre certification and feature digital TV tuners as an option. This also allows for video input from analogue sources. Another reason to buy one of these notebooks is the addition of HDMI for high-definition video output with sound, although neither model seems to offer a high-definition optical drive as an option. If you are a gamer you might like the fact that these models offer strengthened W, A, S, D keys with extra clear markings on them. These models are also available with a fancy painted lid and some other tweaked parts to make them look cool. Features wise we are looking at a Core 2 Duo, PM965 chipset, up to 2GB of DDR2 RAM, 512MB of graphics memory, 4.1 sound, Express Card slot and all the usual stuff that the previous models have such as a web cam. 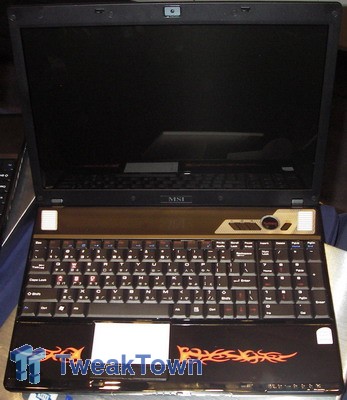 MSI has launched a full range of Santa Rosa based Centrino Duo notebooks and it seems like MSI is very serious about the notebook market. Early on MSI did not really have too much with which to compete, but these models are really looking like they can take some market share from some of the more established players out there. The only question is how good the quality is of MSI's notebooks and how much of a brand name MSI can make for itself in the notebook market, as it is already a cutthroat business with many well established players.